ImpactECON’s staff have performed more than two dozen economic impact reports and studies of multilateral and regional trade agreements, including analysis of the Trans-Pacific Partnership (TPP) for the Vietnamese and the New Zealand governments, China’s accession to the WTO, the World Trade Organisation’s (WTO) Trade Facilitation agreement (TFA) and numerous others. 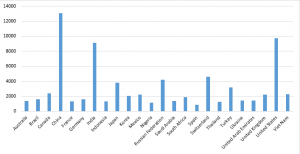 Estimated Value of WTO TFA to Businesses ($US Millions)

ImpactECON also maintains its own database of international ad valorem tariffs, specific duties, tariff rate quotas (TRQs), and MFN applied and bound rates, as well as information on ratified free trade agreements, in an enterprise database system to facilitate economic analysis and development of tariff scenarios over time. Unlike many consulting firms, which depend on online data interfaces, ImpactECON maintains computer code and hardware which allows us the flexibility to customize our calculations to each client’s needs – quickly and efficiently.

ImpactECON staff are continuously adapting their models in light of new developments. For instance, the analysis of non-tariff barriers and the implications of large regional trade agreements on supply chains, employment and poor households, has led to a number of improvements in the ImpactECON models and datasets. Recent developments include:

Whether you are interested in the impact of these trade agreements on global growth over time or on poor households, ImpactECON can help you meet your goals.